Spoiler
That sexual tension though.

If anyone wants a

to the episode, pm me.

Spoilers about the leaked episode inside so don't open unless you've seen it or already know:

Can we just talk about how Viserion died and was turned into a wight and Viserys used to go on about how 'YOU HAVE WOKEN THE DRAGON' ... Well like... literally now.

Also, what if Daenerys is killed by him?

I hope Viserion doesn't hurt too many people, though I only see bad things coming from this. 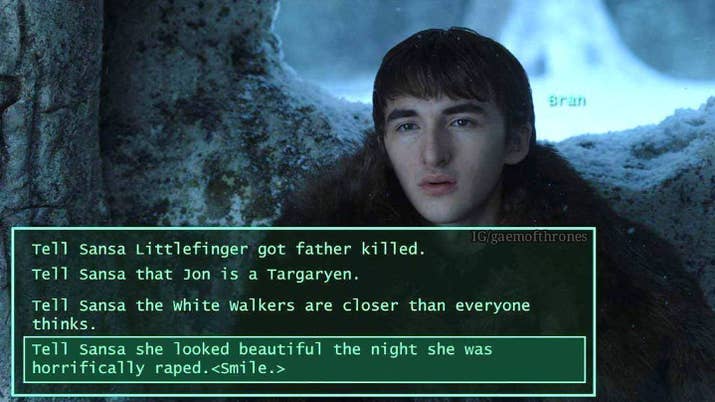 I don't know how they can top the last episode though, it was epic.

I just really hope Littlefinger gets what he deserves this or last season, he's been a thorn in my eye since season 1.

I thought you were up to date?

None of those things are really spoilers, imo.

Spoiler
I DONT EVEN CARE THAT JOHN IS AEGON

TORMUND PLEASE WHY DID YOU HAVE TO DIE

Spoiler
I DONT EVEN CARE THAT JOHN IS AEGON

TORMUND PLEASE WHY DID YOU HAVE TO DIE

Spoiler
I hope he's alive...somehow. Him and "big lady" need to make giant babies to conquer the lands T_T

Also, Jon Snow is now technically called Aegon Targaryan? I dunno if I'll get used to that.

...aaaaaand Jon is now making out with his aunt. He really does know nothing. XD

Also, Jon Snow is now technically called Aegon Targaryan? I dunno if I'll get used to that.

...aaaaaand Jon is now making out with his aunt. He really does know nothing. XD

Spoiler
Not only did they make out, they be banging!!!

I was so fucking happy when littlefinger died...I've been waiting for this forever now. Fuck that guy!

Spoiler
I hope he's alive...somehow. Him and "big lady" need to make giant babies to conquer the lands T_T

Spoiler
people on reddit are saying he was on the side of the wall that didn't crumble... so I'm going to hold onto that. after all, it's a game of thrones rule that if you don't see an important character die, there's hope they're still alive!

THAT WAS THE BEST EPISODE YET

Spoiler
I think that was actually some random sea captain, not actually Euron. Theon still needs to save his sister!

Spoiler
I think that was actually some random sea captain, not actually Euron. Theon still needs to save his sister!

The part where that ironborn douchebag kicks Theon in the cods, only to realise it does sweet fuck all on a bloke that doesn't have any plums, then resulting in Theon kicking his ass good and proper was pure gold.

Also, FUCK ME VISERION! BLUE EYES WIGHT DERG CONFIRMED. Is it just me or did he seem like... so much faster than Drogon or Rhaegal?

ALSO, dat boat sex. DAMN SON, when you finally find out you just banged your aunt.....

I'm kinda disappointed with this last episode, I just liked the revelation about

The last episode of season 6 where Arya kills Jaqen. She goes up to his body and takes the faces off one by one -- she even sees her own face. Don't people have to die in order for The Faceless Men to use their identity? If so, wouldn't this mean Arya is dead? I really wouldn't be surprised honestly.

The whole of season 8 felt kinda rushed to me, so it wasn't surprising the finale was rushed through too.

I could have understood Dani better if more things that motivated her choices were explained, IMO she made some very illogical choices. IMO I lost interest in her character after Khal Drogo died - I didn't like where her character was going to I didn't mind her ending.

Jon Snow was the same as Dani - his character became annoying, partially because of his plot armor. The only way Jon's ending could have been more perfect was is the dragon would have said "You know nothing, Jon Snow" before flying off with Dani. Now that would have been priceless.

I was mostly content with endings for Bran, Sansa, Sam, Davos, Bron, Brianne, and Tyrion.

I had hoped Sansa would get together with Tyrion or Theon, but it didn't happen.

I would have been nice to see more clarification on Sam being relieved of his Night's Watch oath and taking a council position, and if he ever did marry Gilly.

Aria's ending was odd. I wasn't unhappy with it, but it did seem strange she never had much of an interest to go exploring and suddenly she turns to exploration.

... and though it was not part of the finale, I was sad at the fall of House Tyrell. IMO they didn't deserve their end.

honestly the whole of it was a bit of a let down, but I'd read people weren't very happy with the ending before I started watching the last season, so I was kinda prepared for it? still, the whole bran thing was just a bit too easy for me.

I'm also a little pissed at the fact that no couple had a happy ending. I mean I get that it wouldn't be realistic if everybody lived happily every after, but come on. I had hoped for sansa x theon as well, god knows they deserved it.

Back to General Entertainment